The Fourth Day of Inline Christmas

The song remains the same…

T’was the fourth night of Inline Christmas when…Down the chimney Crazy Glenn came with a bound, he was dressed all in neoprene, a tho’ the room be quite dimly lit, I could see he was wearing a full-body EzeeFit. A bundle of Bonts he had flung on his back, a couple o’ grand worth o’ skates in that pack. Just as I reached for a fresh pair of Vaypors, my wife slapped me hard with rolled up newspapers. “Hold on there Hot Shot, there’ll be no debate, for you really don’t need one more pair of skates.” “But honey,” I said, “Santa knows I need more, I really can’t rest till I have three or four…from each boot maker I need more and fast, for each model skate’s made from a one-of-a-kind last. It’s the deck height and spacing, carbon content and fit, no one’s like the other and till I’ve tried them all I can’t quit.”

“Be they Simmons, or Rollerblade, Bont or Luigino, it’s better than dropping our cash in casinos! Don’t forget Pinnacle, Powerslide, or Verducci, (last night I watched Big Night with that guy Stanley Tucci.) Then I must try X-Techs, Canariam, EdgeTek and Hyper, Cado Motus and Schankel, before I’m old and in diapers. Cause skating keeps me young no matter how old I get, but this rhyming’s for the birds, tis making my head split.” She looked at me sideways as she dropped the club, “Your just do what’s best for us, I’ll be in the tub.” So I asked Glenn to leave, but in a move I found daring, I had him leave me a gross of Buck Bearings.

And it was in bath that I found her later that night, her skin glimmering in the soft, pale moonlight. She shook her head slowly as I got undressed, and said she still loved me, tho’ I’m so skate obsessed.

"Yeah, so we get to Rollerdome, and it's closed. We're like, 'well this sucks.' Then Walter dropped his phone in the toilet. Come get us, Dude."

Whew! I’m throwin’ rocks tonight. I feel like the Dr. Seuss of skating! Trying to write this stuff is like a natural caffeine. I’m naturally wired. 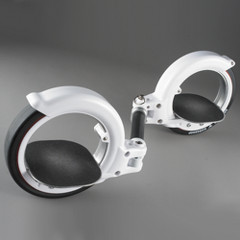 Yep...here's why I won't be competing in 2011. I'm making the transition from inline to skatecycle. I'm gonna own this s#%t!

This is the skatecycle–the next generation recreational vehicle that won an International Design Excellence Award and a permanent place in the Henry Ford Museum. I’m usually leery of these things, but this one looks pretty cool. It combines the foot control of snowboarding, the balanced turning of skateboarding, and the nimble, undulating movements of casterboarding. (Undulating is a perv-word, isn’t it?) Anyway…both feet are placed onto two slip-resistant footboards, and its double-jointed, twisting axle allows riders to move either of the 9″ polyurethane wheels individually by twisting the feet inwards and outwards. This continued foot motion, in synchronization with a twisting upper body, “drives” the cycle over flat, level ground. Dunno…could this be as cool as the Land Rollers were when Apolo was pitching them? Durable aluminum and composite frame supports riders up to 220 lbs. 30″ L x 6 1/2″ W x 9 1/2″ H. (7 1/4 lbs.)