Cold weather skating never used to bother me but I guess ol’ fart syndrome is catching up with me, cause as I’ve gotten another year older my tolerance for the cold has shriveled up quicker than George Costanza’s manhood in a cold pool. I want to roll on up inside a warm cavity and stay neatly snuggled beneath a warm downy blanket, only to be coaxed out of hiding by a warm shower or a vigorous rub down. (The later with the former being the ideal of course…) 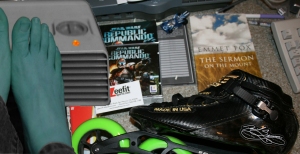 They didn't tell me the skates came with the latest bluefoot technology.

This is my first winter in boots that were built exclusively for speed. Having ordered my boots 1/2 size smaller than my true shoe size, and after heat-molding them to my feet, I can’t wear them comfortably with socks. Yesterday I figured out just how much I’m going to miss the extra padding and warmth when I’m heading out to trail skate this winter…Mmmm, yeah, looks like I’ll be putting in even more time indoors this winter than I did last year. Could be worse, right?

As a lot of you know, indoor inline speed skating is a lot different than skating outdoors. Almost everything I’ve learned indoors has helped me become a more efficient technical skater outdoors, and that’s the primary reason I love it so much. I don’t leave it all in the rink. The knowledge is portable and adaptable. It works when you work it, no matter where you’re using it. But, of course, you’ve got to think it through, find your strengths and improve on your weaknesses if you want to get faster. Since that’s what I want, that’s what I’ve been doing…thinking about the basics and also doing a lot of foundational drills.

This year’s been great, in that I feel like I’ve made a lot of progress, both indoor and out. Indoor, this was the first year where I’d set and achieved a personal speed goal. Getting that out of the way toward the end of what I’d call the regular indoor season, it was hard not to immediately set a new speed goal and go for it once I hit the one I was shooting for. But I’ve purposely resisted the temptation to push it further before the year is out, opting to simply stop, claim some progress, and set myself up to have something to shoot for in 2011. I’ve still got a lot to work on, that’s for sure, and that’s the reason I’m sticking to the basics for the rest of the year.

I’ve been concentrating on balance, body position and simple mechanics. I’ve also been stretching more cause I’m just not very flexible. Never have been. But anyway…Over the last few weeks, I’ve been getting some great tips from my coach on how to position my shoulders, use my arms and feather step into turns at high speed. It’s been paying off, but it’s a lot of work. It’s required me to break things down a bit and work on my stride in small pieces, rebuilding from the ground up. I’ll admit, it’s easier for me to actually do this because I teach the Rink Rabbits class, and we’re hammering on the basics all the time. Honestly, I don’t think I’d be where I’m at today if it weren’t for the Rink Rabbits.

Here’s a video of one of the drills that’s been very helpful in attacking a lot of my problem areas. Both Speedy Weezy and I watched and listened and tried to do what Mantia was telling us at the Technical Clinic we had with him and his friends back in September…

As you can see, I was all over the place with my arms, swinging and turning my upper body. I was also rushing into the crossover, not really getting my weight distributed properly, ending up with a weak under-push. Speedy Weezy was setting up in an A-frame, and bobbing up and down. Having all this pointed out has helped me help us both, and I’ve been able to in turn help the rest of the Rink Rabbits with their problem areas. We’ve all been working hard at fixing these foundational pieces, and for a lot of the team, the work has really been paying off. Young and old, experienced and noob alike, these simple foundational type drills are really proving to be just what the speed doctor ordered. We’re becoming better skaters from the ground up, especially Speedy Weezy, Speed Demon, The Brothers Speed and Speed Lord. They’ve been much more determined to do things right since the clinic. They’ve become very purposeful. It’s been great to watch and be a part of their growth.

So, not wanting to deal with the cold and the wind anymore, I got up at the crack of sanity and went to Rollerland to “treat” myself to a private practice this morning. Armed with a big cup of Starbucks and an iPod full of instructional video clips that Mantia gave us, I set out to prove to myself just how much I want to be a better technical skater. Seriously, my goal is to do these early morning rink runs at least once or twice a week now through the rest of the year.We’ll see how that goes…

That took an hour, and I was back to the house well before I needed to be to work. I wonder if I can get the survailance video to see what my form looks like? Or maybe just ask the coach to review it and give me some pointers. In any event, it was a great way to start the day, and I’m really going to make an effort to get more of this training in.

Or…hell, I could suck it up, get used to the bluefoot sensation and give ice a try, but that’s something I swore I’d never do…just like the rest of this stuff.

One response to “Cuckin Fold”