There are few sports where the camera is as unforgiving as it is with inline skating. Particularly outdoor inline skating. I’ve seen some pretty horrendous “nut shots” in soccer, but nothing like the limbs-akimbo contortions I’ve seen looking at inline race photos. Honestly, the camera captures us in some positions I find utterly impossible to recreate in a staged way. 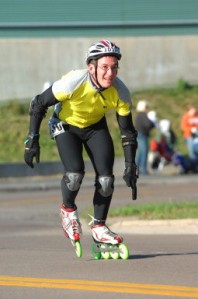 Some of the less-than-flattering shots of my illustrious skating career are presented here for your snickering pleasure in this brief (quasi-)photo essay. Don’t just skate there, let’s get to it, strike a pose there’s noting to it…looking like a loon while skating that is. 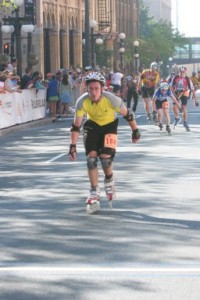 Getting caught in really poor form is one thing, but it’s really the faces that tell the story, don’t they? 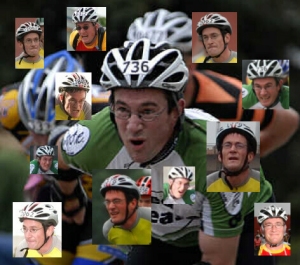 The many reasons I shave in the dark.

I think I’ve been caught making every phonogram face. Why is it that all of my pictures look like I’m taking a social call from Rectal Rooter?

My friends end up in some unfortunate shots too. I made the mistake of posting a picture of a friend of mine to the old Inline Fitness site and got the smaller inset picture in my email the next day.

Lesson learned – never post pictures of your friends pronating online without their consent.

But for all the lousy shots my buddies and I end up in, there’s always one in the local skate club who never takes a bad picture. Always in great form, always smiling, always smooth, Mr. Cool. Every damned picture… 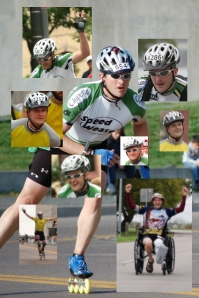 Some of us wait years for a good skating picture. Seriously, this dude has a scrapbook full of them. I’ve figured out his secret. You wanna know why he’s always caught looking like he’s having a good time? Because he IS having a good time. That’s the only reason Tony skates – to have fun with his friends. No matter what kind of race he has, and like all of us he’s had all kinds, but no matter what, he’s smiling at the finish line. There’s a lot to be said for that. When this guy’s on wheels, the good times roll. 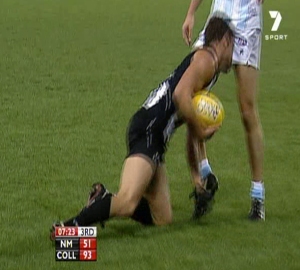 This game is nuts...

But hey, all things considered, I guess funny face pictures aren’t all that bad. It could be worse. GOALLLLLLL!!!!!

1/24/10 Training: Stayed up all night with the kids watching NSC: Tribulation so slept in a little. Dragged myself to practice but had to leave early to attend my nephew’s birthday party in Denver. Was able to get 80 good laps in with “the fast kid” and the coach before I nearly coughed up a lung because I’m dealing with the crud. I get so conflicted when I know I shouldn’t push myself too far. I probably shouldn’t even have gone to practice, but I didn’t want to miss the 2nd to last 100 lap drill of the season. Nuggin’ futs I guess.

1/25/10 Training: Day of Rest. The Lord said unto him – skate today and I shall smite you. Skate I did not, and here I sit. Guess that’s called good listening?

1/26/10 Training: Led the Rink Rabbits around tonight and I think we had the best time ever. I did this thing where I’d just shout GREEN LIGHT GO at the top of my still raspy lungs at moments they didn’t expect it. They went nuts! The kids are really coming along. They’re all learning their cross overs and getting very low in the corners. Lot’s of laughs and good times. But also learned a couple of things tonight – some kids need to know you see them at all times, and parent’s phone numbers are probably a good thing to have on hand at all times.

2 responses to “Strike a pose”