It’s been a great week! I’ve been outside nearly every day, rollin’ through run-off, mud, goose poo, slush and ice. And of course I’ve been putting my skates away wet, so each day when I start out I have to crack my wheels to get them rolling, and I look like Pig Pen from the Peanuts with a sulfurous dust cloud coming out of my wheels for the first mile. My wheels don’t really start rolling free again until I hit the first puddle and grab a bit of moisture.

Hugo Chavez looked at me twice when he got a whiff of my freshly cracked bearings.

My buddy John’s skates are in equally bad shape. Rolling on wheels this crusty feels like rolling on rocks, something akin to what I imagine Fred & Barney would have skated on in the Bedrock Classic. 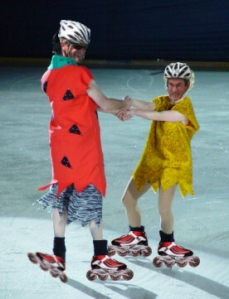 "Swing me out wide and I'll clear that ice patch at the trailhead."

Once we get moving it sounds like Freddy Kruger scraping his knives along a rusty pipe. But we’re so happy to get the break and be outdoors we plow forward like dream warriors, Freddy be damned. Our times are strong for this early in the season, and we’re riding winter rigs, which are about as brutal as they come.

Getting to the point and staying there all winter, these wheels have seen really good days.

Skating on really bad equipment all winter has become “the routine.” If I skate outdoors on new, clean wheels in the winter I feel like I’m cheating myself of the base-building benefits derived from long, outdoor skating on, well, crap.

Water is the only lubricant these bearing know.

Trying to get back up to the same pace that I hit toward the end of the season on finely tuned equipment is my current goal. It takes time to get back up to season-end speeds, but by the end of February, if the weather holds out, I should be able to do it. I want to break my Colorado “Altitude PBR” before April. As long as the damned snow stays away and an off-leash Dino doesn’t take me out on the trail, I should be able to do it.

1/19/10 Training: 10 miles out at Boyd Lake solo. Took The Schneid’s 110’s for a spin, had a great skate. Weather was really great. Later in the afternoon we had a blast at Rink Rabbits practice. I introduced a couple of new game drills and the kids had a lot of fun.

1/21/10 Training: 12 miles out at Boyd Lake State Park with John. A little colder but the trail was in the best shape it’s been in all week, more dry than wet.

1/22/10 Training: 10 miles out at Boyd with John at lunch. The weather was only slightly warmer than the day before, but it was still in the 30’s. We were at a loss to figure out how some pretty large pieces of snow and ice ended up in the middle of the trail in a lot of places that it wasn’t the day before. Kinda like crop circles…

1/23/10 Training: 1 hour on the elliptical, level 5, 6.2 miles. Went to bed feeling like I was getting the crud my family has had all week so I knew I’d need to get up and sweat if I wanted to beat it. So far so good. Did Rink Rabbits this morning and @SpeedyWeezy was able to spend some quality time with “the fast kid” and John in preparation for the meet in Wichita next month. I took some time at the end of the practice to light it up on the 110’s indoor and I’m definatly feeling more control. That’s progress.