Morning: Skated for about an hour on a fresh stretch of black top that was due to open to the public later today.

Touched for the very first time...

Here in Fort Collins, we’ve been enjoying a pretty consistent flow of road-works stimulus projects. The particular stretch I hit today was a little over a mile of hills between Harmony Road and Trilby Road. 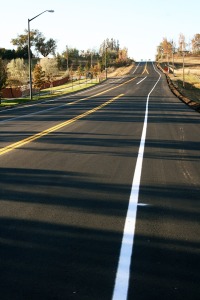 As it happened, my coach caught sight of me and came down to have a look-see at the virgin road. (We live in the same neighborhood, which proves to be very convenient for having a truck to race early in the morning as I’m working out and he’s taking his kids to school.) Anyway, I handed him the camera and hammed it up on a couple of the hills. I don’t have a tele-photo lens, so you won’t see my pretty Sunday-morning, 2-day-growth mug, but you’ll get the idea of just what kind of hills I’m talking about from this shot:

I bet a luge would have been fun too.

It ain’t the alps, but it’s fun nonetheless!

The hills were a bit of a challenge, both up and down, because if you’ve never skated on FRESH asphalt, let me tell you – its oily. Black ice. I tried to t-stop and kicked up an oil-slick! Seriously.

I was just noticing the other day that even the roads in my neighborhood have been stained black because of all the road work leading to our sub-division. And I’ve noticed that they’re slick too. So combine the slickness with harder durometer Matter Yellow’s (made even harder by the cold) and I feel like I’m slipping a lot. Good practice for double pushing, I guess.

Late Morning: I got to lead indoor speed practice this morning, which was fun. Got to put the team through 100 laps, 13 plyo exercises, low walks, alternating leg push drill, and some quick relays. Two of the kids on our team will be competing at Mid-America in Wichita next weekend, so we were sure to work it, even though the coach wasn’t there today.

My hips are sore tonight. Kids are in bed early, Horsey Pants and I are going to watch a French movie. Tomorrow is rest day!

This entry was posted in Training Log and tagged inline, rollerblade, skate, skating. Bookmark the permalink.